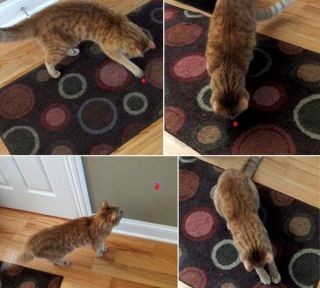 I’m sure every cat owner owns one: A laser pointer. It’s simple to entertain your cat with a laser pointer. You turn it on and your cat chases it like crazy while you can stay on the couch and watch your favorite TV series. It’s hilarious to see your kitty go crazy over a little red dot, walking over the walls, making crazy jumps just to catch it. But why do cats like it so much? Cats are just like their bigger cousin predators. They have agility, strength and speed. Whether your cat is indoors or outdoors, they all have the same instincts and they want to hunt. The laser pointer changes direction a lot and it’s going fast. It’s moving and that is what brings the predator out in your cat. They see a little prey in that red dot, as it moves the same way as their prey would. So it’s worth chasing!

For indoor cats, this can be the perfect toy. They don’t need to hunt for food anymore but if they don’t have to hunt anymore, there needs to be another way to get rid of that built-up energy. They still need to be stimulated and the best way to do this is to mimic the part where cats should hunt. A laser dot makes the perfect “prey”, and it stimulates your cat, uses up his energy and is good exercise. What To Watch Out For?

The laser pointer is a toy to use carefully around your cat.Cats can develop behavior issues around the little dot. Some cats may become frustrated when they can’t catch the dot, and this may result in aggressive behavior such as biting. Your cat may also become overly stimulated by light and chase light that comes through the window blinds, or the sun reflecting from your watch onto the wall.

The best way to avoid this behavior is to give your cat something he can put his teeth into (example: a toy filled with food) after the play session. The reward becomes the prey your cat has actually caught.

The laser pointer is a great toy to entertain your cat with and to get him to exercise, but we also need to think about the safety of your cat and watch out for weird behavior.